Dota 2 was built upon the legacy of Warcraft 3 custom games and modding. With a new Netflix anime potentially bringing many new players to this game we love so much, it's an excellent time to improve the Arcade experience for the entire Dota community - so that they can keep the tradition strong, by building and enjoying great new custom games!

Custom game lobbies are currently plagued by some issues which affect all players, but especially so newer ones - they cannot even play any games before going through at least 30 dota matches! We propose solutions to each issue which would, we hope, make the Arcade more accessible to newcomers.

This message is endorsed by the teams behind the following custom games:

ISSUE #1: 30 game requirement to use the Arcade 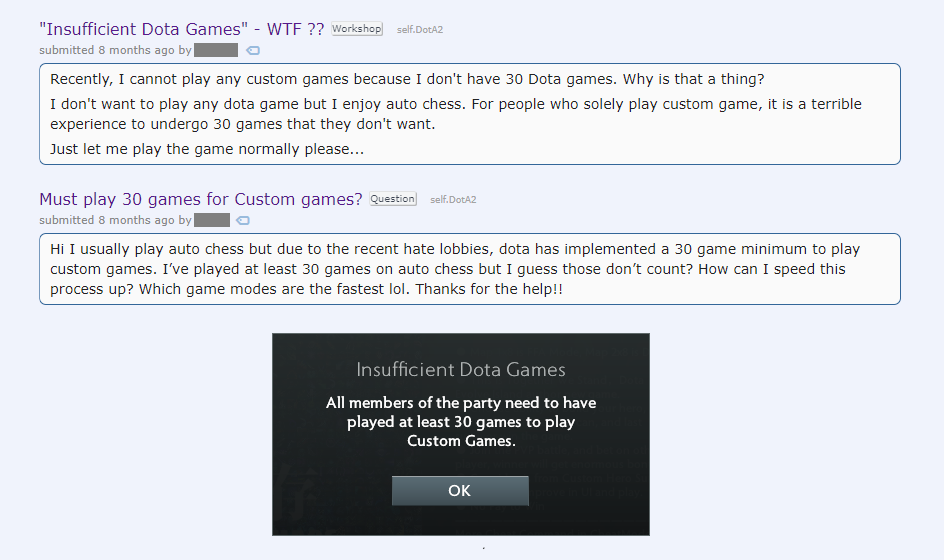 Problem: Players can no longer download Dota 2 just to play games on the Arcade; instead, they are now forced to play 30 games of Dota 2, even if their original interest was in playing Autochess or some other custom game. This has severely handicapped the Arcade's ability to bring new players into the Dota 2 ecosystem, since many of them will simply see the restriction and leave. This was a band-aid solution to deal with bots, and was never replaced with a better, permanent one.

Suggested solution: Make the 30 game requirement opt-in instead of mandatory, on a custom game basis, by making it an option in the game’s addon settings (addoninfo.txt file). That way, games which are not under bot attack can be enjoyed by new players, and those which are can enable the 30-game bot protection as needed.

ISSUE #2: hour-long ban for failing to ready up for a custom game

Problem: A 1 hour ban is given when a player fails to click accept on any custom game lobby. This is too severe a penalty for real players, and causes constant issues due to simple human error.

To compound this issue, the penalty is applied even on 1-player lobbies. It is also exploitable if the lobby’s host is a griefer, since they can start the lobby early (before the proper amount of players for the game is reached), giving players the choice of either taking an 1 hour penalty for something out of their control, or wasting the sometimes several minutes they spent finding their current lobby so far.

Suggested solution: Do not punish players for not clicking the accept button if:
a) It is a single player lobby,
b) The lobby does not have full players, or
c) The entire lobby is filled by a single party.

Also, scale the punishment: start with a 5 minute penalty, then increase it to 10 minutes, 30, 60, etc. The Arcade ban should also not affect regular Dota: failing to load a custom game should NOT ban you from matchmaking or from playing with bots, for example.

Problem: This is a recent problem, only having been noticed this last week. Upon starting a match in any custom game with leaver penalties enabled, all players' abandon timers will start counting down, and, after 5 minutes, they will all receive an abandon (and 1 hour ban from the Arcade). Players have discovered that manually disconnecting/reconnecting during that period is a valid workaround for the issue, and stops the abandon timer.

Suggested solution: This was a recently introduced bug, so, hopefully it will not be a challenge to isolate and fix it, or revert its relevant update. We speculate, based on the given workaround, that there is a problem with detecting or validating players' connection status at the start of a game, but this is only a guess; Valve is better positioned to diagnose and fix this issue.

Problem: Players who are kicked from lobbies can instantly rejoin them. This is exploited by bots and griefers to rejoin faster than anyone can kick them out.

Suggested solution: Make it so players cannot rejoin a lobby they have been kicked from either for the duration of the lobby, or for 5 minutes. Also, to avoid bots quickly joining and leaving a lobby in order to avoid being kicked from it, add a small cooldown (5 seconds would be enough) to a player’s ability to enter or leave a lobby (i.e. can’t rejoin if you just left).

Problem: Griefers will join lobbies when they are missing a single player, causing the game to auto-start. This causes the other players to be trapped with the griefer, since they cannot decline (as that would only grant them a 1-hour arcade ban). Bots are especially effective at this type of griefing, for obvious reasons.

Suggested solution: Add a 5s countdown to game start so that hosts will have a chance to kick griefers trying to sneak in. Players should be able to leave the lobby during this countdown, but if they do, this should incur a cooldown (at least 1 minute) on their ability to join the same lobby. If that happens, the lobby should stop the countdown and go back to its previous state (waiting for players).

Problem: When a custom game is updated, it becomes impossible to play for about half an hour (or more), as some players will see (and be able to download) the new version, while others won't.

Lobbies with the old version will stay open for hours, without being able to start, trapping players inside them and sometimes triggering the dreaded hour-long ban (malicious bots also abuse this by sometimes leaving those outdated lobbies open for months). Players frantically uninstall and reinstall the game tens of times, confused and angry at their inability to play and undeserved bans.

Suggested solution: Let players know immediately that their downloaded version is different from the most up-to-date one. Close all open lobbies immediately when a custom game is updated, and only allow new lobbies to be created by players with the newest version. When players attempt to join or create a lobby, the game should check their local version, update it if necessary, and only after that allow said joining/creation.

Other issues (in order of importance)

It's possible to create malicious lobbies with improper settings

Suggested solution: Do not allow lobbies to have settings that don’t make sense. Verify lobbies settings with what is acceptable for that custom game, and either deny lobby creation of lobbies with incorrect settings, or do not list lobbies which have incorrect settings so players cannot accidentally join them.

Suggested solution: We could think of no clear and easy way to fix this problem. One step in the right direction is to delist lobbies (or remove) that have a) Incorrect configurations so that its impossible for people to join or b) Are running outdated versions of the custom game so it's also impossible to join. A solution would be for the game coordinator to periodically check the legitimacy of open lobbies, and even forcefully shut down ones that are unable to be joined, or delist them.

No option to ban players from your lobby

Problem: Some rare, but extremely toxic and dedicated actors exist in the community - players that will continually join custom games, in some cases for years, with the sole intent of trolling and griefing the game. Hosts have no way to ban these players from their lobbies, so they have to kick them each time they host (and remember, they are currently free to immediately rejoin).

Suggested solution: Allow players to have a personal banlist, so that when they host a lobby, players on their banlist cannot join the lobby. For ease of use the Steam block use can double up as the ingame banlist, with adding of a “Ban” option when hosts right click on a player in their lobby.

Players in parties can exceed max players of custom game

Problem: It's possible for parties of players to play a custom game beyond its maximum players. E.g. a two player party can click the “Play” button on a custom game that is only max 1 player, they will be able to join the game, the game will not work like this but it would be better if this was not possible.

Developers do not have access to server crash logs

Problem: Server logs, especially crash logs are not available to developers. Valve must have them, so it's a shame we cannot access or view them, as it would greatly help with debugging and development.

Suggested solution: Add an option to view/download the last 10 dedicated server logs. This option could be added to the “Workshop Manager” application.
...

WHAT CAN YOU DO?

Tell Valve that the community tutorial, as well as the Arcade, are important for you! 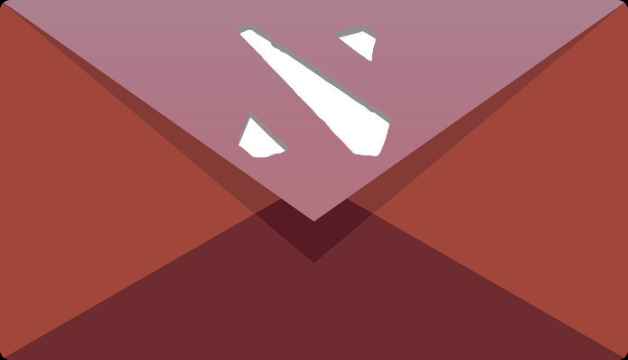 Write to the Dota 2 Team 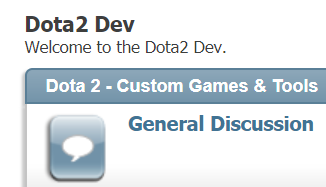 Make a thread on the Dota 2 Dev Forum